UK vs US: Understanding Communication Differences at Work

America and Britain have a huge number of things in common, from popular culture to the language we speak. But how similar are we when it comes to work and business communication?

From how we see each other to what we say and what we really mean, we spoke to 1,000 US workers and 1,000 UK workers to find out just that.

How Brits and Americans See Each Other 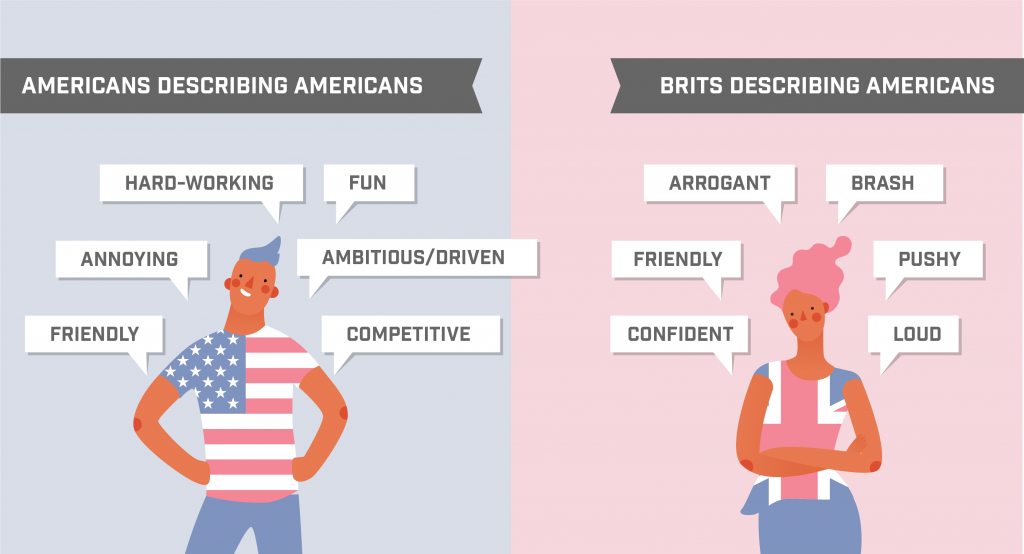 To start, we kept things simple. We wanted to know how both US and UK workers would describe themselves at work, compared to how they’d describe each other. This question turned up some interesting results, with Americans more likely to use words like ambitious, competitive, or driven to describe themselves, while Brits opted for words such as loud, arrogant, brash, and pushy. It’s clear that both sides see Americans as being driven at work, however, this may be perceived more negatively from UK colleagues, with one telling us they see Americans as “very overpowering and restless, with lots of expectations and not much patience”. 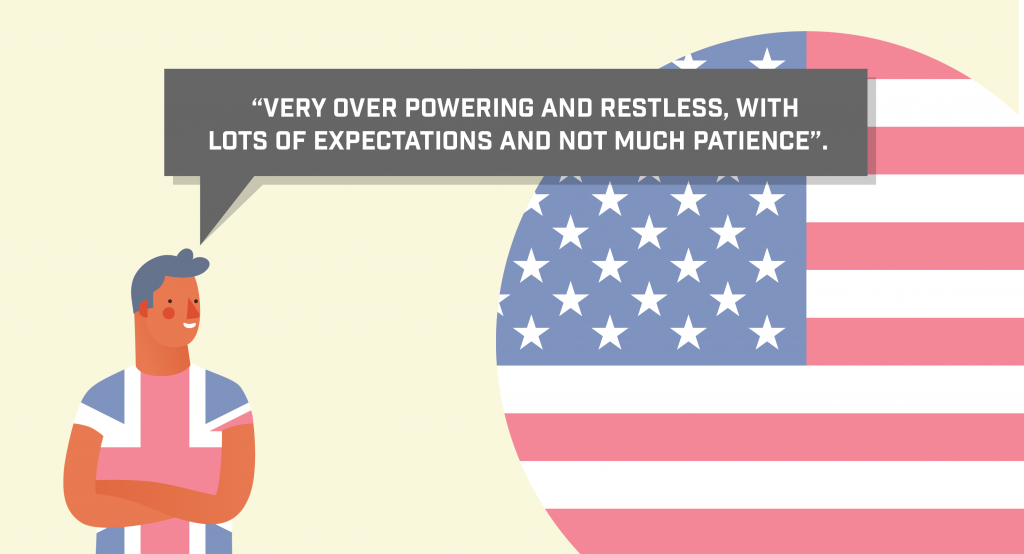 Across the pond, Brits described themselves as easy going, friendly, and even lazy, while Americans thought they were hard-working and polite but stuffy, with one telling us “they work hard but can be a bit snotty at times. A lot of them tend to talk down to other people to make themselves feel superior”. 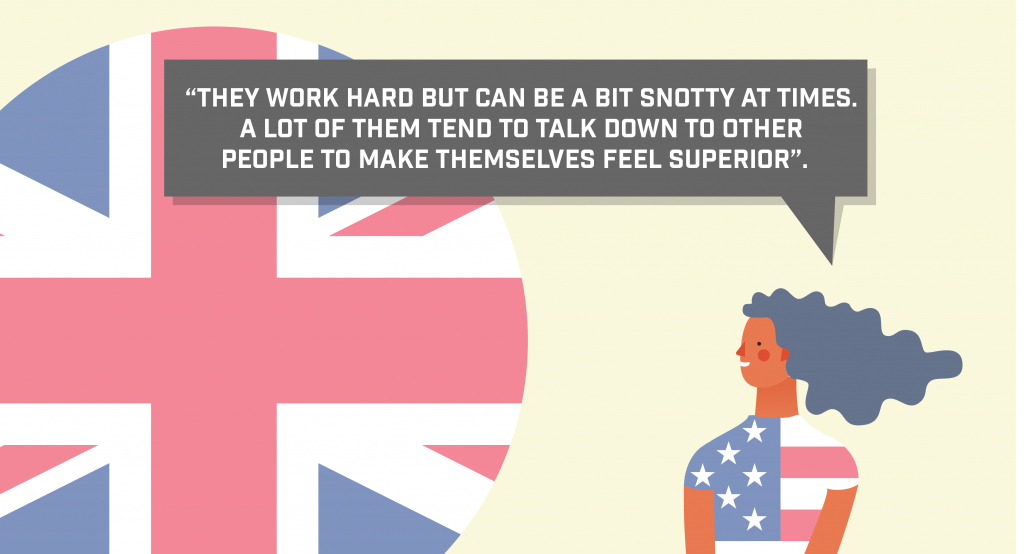 US vs UK: How Do We Communicate Differently?

Our survey found that, across the board, Brits are more likely than Americans to take things negatively or see a subtext in casual communication. Americans, on the other hand, are most likely to take things literally and see the positives.

Take the innocuous statement “let’s do lunch soon”. Perhaps be careful throwing this into conversion with your UK colleagues, as only one-in-five (20%) people in the UK see this as a positive statement, compared to almost half (48%) of Americans who mean this positively. This could be due to the British habit of taking things less literally and looking for subtext in communications – they may feel this statement is blasé or dismissive rather than a genuine offer of lunch.

Similarly, the majority (59%) of Americans use “I hear what you’re saying” as a positive communication when discussing ideas at work – but only three-in-ten (30%) Brits agreed this was a positive statement. A British worker who is looking for subtext in communication could see this statement as dismissive and a prelude to a disagreement, while an American worker may take it as a more literal expression of respect.

Over half of Americans (55%) would use the phrase “that’s not bad” as a positive. Brits, however, were more likely to see a negative subtext in this statement, with only 39% agreeing it was a positive statement and one-in-five (20%) using this as a negative communication. Again, an American using this statement may be being very literal – if something is ‘not bad’, it is ‘good’. A Brit on the other hand may be politely using this phrase as a negative to mean something is not terrible, but it’s not particularly good either. 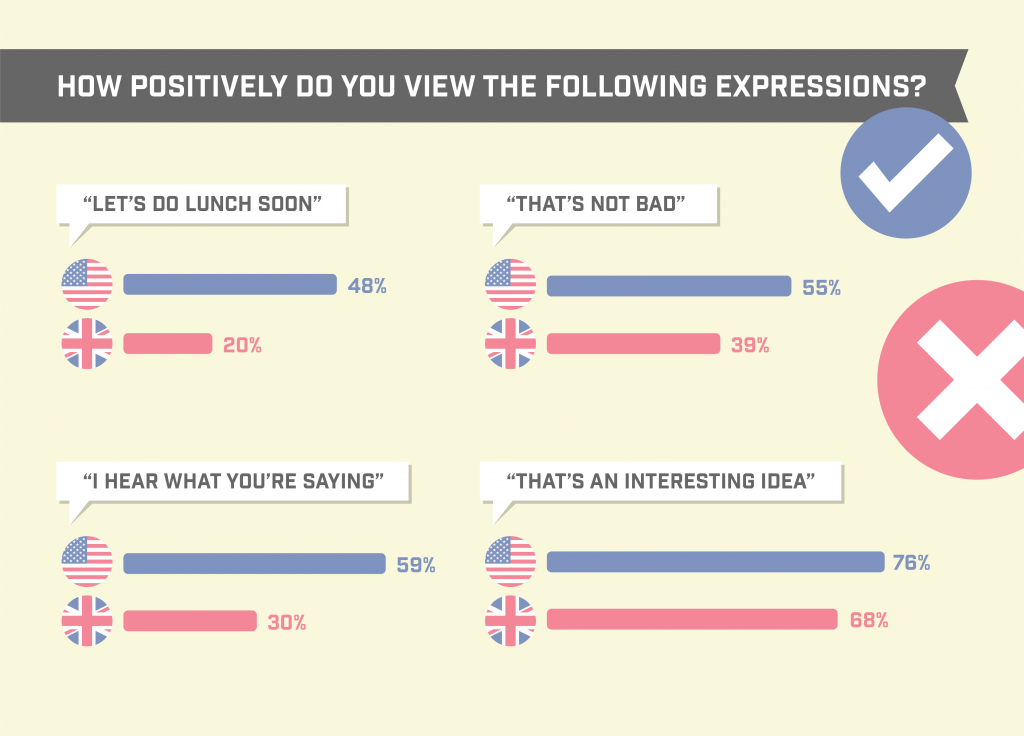 US & UK Comms: What We Say and What We Mean

Continuing with the theme of subtext in business communication, we gave our US and UK respondents some sample phrases along with example perceptions, asking which they thought best matched up.

Three-in-four (76%) Americans would hear “that’s an interesting idea” at work and assume they were being told the idea is impressive. However, if a colleague from the UK is saying this, be aware that 32% are suggesting your idea is ‘ridiculous’.

Similarly, if a British colleague tells you they “have a few amends”, more than two-in-five (43%) are actually letting you know the work is awful and needs completely redoing. Only 34% of Americans would read this subtext, with the vast majority (66%) assuming they were being told there were only a few small typos.

Jamie Gelbtuch, founder of New York based company, Cultural Mixology, explained these cultural differences between the US and UK:

“US culture values frankness and honesty in communication. There is a catch though. Americans are very direct when circumstances are positive. However, they tend toward a slightly indirect style when providing negative feedback. As a result, Americans most often give negative feedback in a “sandwich form.” For example, first they say something positive (bread). Then they insert the critique (meat). Finally, they end on a positive note (bread). Being honest and direct in this way is highly appreciated, considered constructive, and emphasizes practicality and optimism, two important cultural values.

The British, on the other hand, have mastered the art of toned down, nuanced, and understated communication. The word “rather” may be used to lessen the effect of a negative statement. For example, “The conference was rather disorganized” likely means it was chaotic. Similarly, “quite” is often used when you don’t want to say something negative. So, “The food was quite good” may mean it could have been much better! Don’t necessarily take a statement at face value.”

Next, we thought it would be interesting to look at what we find acceptable in the workplace. Are there any big differences between UK and US workers?

Perhaps surprisingly, we found that despite the classic British stereotypes, we seemed to agree across both countries that swearing and sarcasm are unacceptable in the workplace. Four-in-five people (80%) in both the US and UK said swearing was a big ‘no’ at work, with the majority (67% in the US and 64% in the UK) agreeing that sarcasm in the workplace is also unacceptable.

However, our UK colleagues may be more likely to flirt at work. A quarter (24%) of British respondents think there’s no harm in flirting in a professional capacity, compared to just 16% of those in the US.

Do you have an issue with gossiping in the workplace? Maybe look to your British colleagues first. Brits were twice as likely as Americans to find a gossip at work acceptable (24% vs 12%).

What the Hardest Thing About Working with Colleagues Across the Pond?

There are bound to be issues with any workplace when working internationally, but we were curious; what’s the most difficult thing about working with colleagues across the pond?

For both UK and US respondents, the most common answer to this question was gossip – with both nationalities assuming the other was more likely to gossip, maybe we’re more similar than we realize!

When asked about the downsides of working with Brits, Americans also highlighted cultural differences, sarcasm, talking about sex, and being unsure about the subtext of what they’re saying. One respondent told us “Brits can be indirect and it’s hard to know what they are saying or they can be so polite I don’t know what they’re really thinking” – a sentiment that proved consistent across our survey results.

When asked what they disliked the most about working with Americans, UK respondents said the accents, overconfidence, cultural differences, and loud, showy displays. As one respondent put it, they didn’t like Americans’ “showier demonstrations, such as cheering and whooping, rather than polite applause”.

What the US dislikes the most about working with Brits

What Brits dislike the most about working with Americans

In any business, you’ll find different communication styles between people. While nationality turned up some interesting results, we were also curious about the differences between men and women in the US workplace.

We looked again at the question of what is and isn’t appropriate in the office. Firstly, flirting – a definite no from women, with the vast majority (93%) saying this is never acceptable at work. However, we found a different view from men, with well over one-in-four (27%) thinking a flirt at work is acceptable. Men were also more likely to find discussions about sex okay in a professional workplace. One-in-five (20%) men think discussing sex in the office is acceptable – something most women (94%) disagree with. When asked about shouting, we received a similar result, with one-in-five (19%) men seeing no issue with raising voices at work compared to only 5% of women.

It appears men may be missing subtle insults in the workplace. Over three quarters (77%) of men would hear “bless your heart” and think they were receiving a compliment, or being told, “you’re sweet”. In fact, almost half (44%) of the women surveyed would be using the statement as an underhand insult to mean “you’re dumb”.

Ladies – next time a man at work tells you he has just “a few amends” for you to look at and you think it’s going to be a quick job, think again. Almost half (44%) of the men surveyed would actually mean “this is awful and needs redoing”. Only one-in-four (26%) women agreed with this meaning, with the majority (74%) taking this statement to mean “there are just a couple of typos”.

Finally, we found that women may be more likely to see negative subtext in communication. Just over half of the women surveyed (51%) would hear the statement “with all due respect” at work and perceive it as negative communication, while only 32% of men agreed. Further still, one-in-four (26%) men see this communication as ‘very positive’ – that’s double the number of women (13%) who said the same.

We were curious about these differences in communication between the genders – in particular, why women are more likely to see negative subtexts and why men are more likely to engage in behavior that could be seen as unprofessional, such as flirting, shouting, and discussing sex at work. We spoke to Robin Rosenberg, clinical psychologist, and CEO of organizational civility program Live in Their World, who told us:

“Historically and currently, women have been the recipients of bias and discrimination in the workplace. One possible explanation for this gender difference is that women are more likely than men to be on the “alert” for possible negative actions toward them. Being more likely to see a negative subtext (an “obstacle”) may help women better navigate around such obstacles. To use a different metaphor, it’s important to know where the landmines are so that you can step around or over them, but not on them.”

So, being on the alert for negative actions and confrontation could be leading women to perceive casual communications negatively – perceiving a communication as a negative allows the woman to carefully navigate the situation rather than make it worse. This could also apply to women being less likely to flirt, shout, or discuss sex at work, as they are more cautious of negative outcomes than their male colleagues.

Whether you’re working abroad, are employed by an international company with multiple offices, or work within a business targeting international customers with a virtual phone number, part of the business world is learning how to communicate with different people. While we may be similar in a lot of ways, the subtle differences between the UK and the US, and even between genders, mean that problems in communication can occur. As with any business relationship, it’s important to pay attention to the nuances in conversation and communications to ensure your relationship with colleagues all over the world can thrive.

Every year on June 14th, the US celebrates Flag Da

South Africa is a country of cultural extremes. Pe

As we talk about in our #eBook, "The Role of Resil

South Korea is one of the most ethnically homogeno

We ❤️ happy clients!⁠ ⁠ We work with a wid